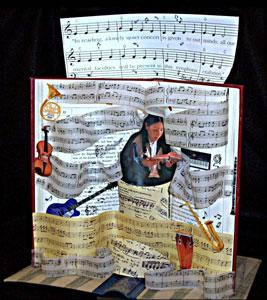 Pikes Peak Library District employee Vincent Colicchio never considered himself an artist, but he became one nonetheless, through the curiosity and caring he exhibited at his job in Circulation at PPLD’s downtown Penrose Library.

According to Colicchio, “It began by me saying, ‘That’s a treasure. That shouldn’t be thrown out.’ "

Colicchio handles books for a living, so he sees a lot of them on a daily basis. But he recently found his love of books extending to damaged books that were being discarded.

“I, like other people who work in libraries, get heartbroken when I see books in the recycling bin. I think it’s a waste,” he said.

When Colicchio turned his eye to the bare shelves behind the checkout desk at Penrose Library, the altered book project began to take shape.

“I was telling my supervisor, ‘You know we could jazz it up back there.’ I said, ‘We’ve got this space, we should do some displays.’

“Then around Christmastime, my supervisor said, ‘I like your ideas. Go ahead and make a display and let me know if you need anything.’

“I hadn’t really intended to do anything myself, so I was like, ‘Oh no! Now I actually have to do something!’ So I did some altered books around the holidays in a matter of just a few days just to have something there.”

Colicchio said he found books in the Library’s Catalog on how to make altered books, and then he found “quotations by writers that I liked and really reflected the spirit of a book and its relationship to a reader. And those became the focal point. By just contemplating that quote, vague visions and imagery would come up, and I would try to follow it and let it grow as I was creating each altered book.”

“It just lends itself to being at the library. It’s recycling and it’s creativity inspired by books we have in our catalog that have the techniques on how to do it.”

Colicchio recently donated two of his altered books to the Colorado Library Education Foundation for their upcoming silent auction to raise funds for scholarships for Colorado library employees to attend Colorado Library Association and division workshops and the annual CAL conference. Colicchio’s art speaks to the great potential of books -- even discarded books--to enrich and change lives.

The images below show the extreme care and detail Colicchio brings to his work. The work is even more impressive in person and is currently on display in the Friends Bookstore in East Library. 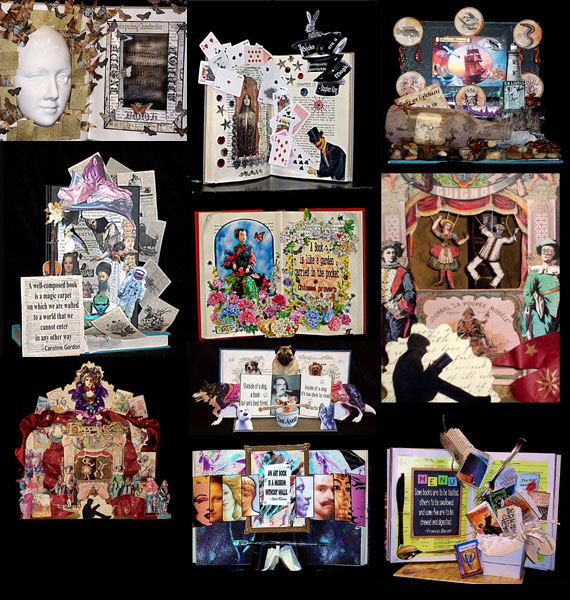