Colorado is fortunate to have many talented published authors that are willing to share their stories and provide insight into their lives. Every quarter, the Friends are pleased to bring one of those authors to East Library.

Join us to hear from celebrated Children's Author

This family friendly event is sure to dazzle all who attend - from the young to the young-at-heart! Light snacks will be provided.

Free for all Friends of the Library Members and only $5 for non-members. Children 17 and under are free. Ms. Regan will have a selection of her books for purchase and to autograph; she is kindly donating 100% of the proceeds to the Friends.

López has been named one of “Idaho’s Top 10 Most Influential Women of the Century” by USA Today and has been identified as one of opera’s “25 Rising Stars” by Opera News.

The daughter of Mexican migrant workers, she now is on the roster of the Metropolitan Opera in New York. She will tell her success story and perform selected works.

She will be accompanied on piano by Eric Osman, who performs with the Colorado Army National Guard band and teaches piano.

A second accompanist, Ana Santeliz, has played musical instruments since she was a child.

She has served in the Illinois National Guard Army Band and transitioned into the Army Band in 2014. In 2015, she moved to Colorado where she was stationed at Buckley Air Force Base in Aurora. In 2017, she discharged from the military and began studying Music Education at Colorado State University – Pueblo. She now works for the Community Partnership for Child Development as the Outreach Coordinator.

Griego graduated from Leadership Pikes Peak’s Leadership Now! program for young professionals in 2018, served on the steering committee for Leadership Pikes Peak’s 2019 Women’s Community Leadership Initiative class, and was hired to manage both programs in 2020. Griego was selected as part of the Colorado Springs Business Journal’s Rising Stars Class of 2021 and is currently serving for a second year on the Women’s Foundation of Colorado’s first Women and Girls of Color Fund Advisory Council. She is now the Digital and Community Educator for Inside Out Youth Services.

The program’s emcee will be Amy Sanchez-Martinez. A graduate of Mitchell High School and UCCS, she became a teacher at Mitchell, where she taught world history, U.S. history, constitutional and criminal law, and student government. After earning her Masters of Science in Organization Leadership with graduate honors from Regis University, she also served as social studies department chair for six years before becoming a master teacher for the System for Teacher and Student Advancement. She also served as dean of students and taught a student leadership class at Mitchell while studying for her principal’s licensure. As assistant principal at Mitchell, she oversaw instruction and professional development. Amy is currently campus director at Sand Creek High School, serving staff, students, and her community.

For immediate release – The Friends of the Pikes Peak Library District will inaugurate a new series of programs, Meet the Author, at 1 pm Saturday, Sept. 17 at the East Library, 5550 N. Union Blvd.

Green, a Colorado Springs outdoorsman, writer and photographer, has written nearly 50 books on rock climbing, hiking and scenic byways all over the West, and particularly in Colorado, since 1977. His newest book is “Hiking Colorado’s Hidden Gems,” from Falcon Press.

His talk about fall color drives will include recommendations on the best regional routes to consider for leaf-peeping this autumn, and discuss some of the landmarks and historic features along the way.

Green is a former Golden Quill Award winner, an annual honor bestowed by the Friends. After his talk, he will have copies of his books for sale and will autograph them.

Admission is FREE for Friends members, or $5 at the door for non-members. To join Friends in advance of the event, visit this link: https://ppld.org/friends/join

Please RSVP for this event so that we may accommodate all who wish to attend and supply free refreshments for everyone. Do so by e-mailing diehlbev@hotmail.com or by texting or calling (719) 573-4894. 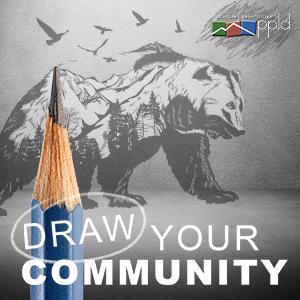 We're celebrating our communities through art! During the month of August, patrons participated in PPLD’s Draw Your Community program and submitted a drawing depicting what they love the most about their community/neighborhood.

Several PPLD locations are now displaying their community's drawings throughout the month of September. Artists have been invited to the gallery open houses to talk about their work with the public and to meet other artists.

Join us to celebrate and appreciate the works of local artists from our communities. Each reception will include a meet and greet with artists and light refreshments. No registration required.

An online gallery is also available to browse.

International best-selling author Jim Fergus has been named the 2022 recipient of the Frank Waters Award by the Friends of the Pikes Peak Library District. Fergus, a Colorado College graduate, received the award and was the keynote speaker at the annual Literary Awards Luncheon at 11:30 a.m. on Saturday, June 18 at the DoubleTree by Hilton, 1775 East Cheyenne Mountain Blvd.

Fergus’s first novel, “One Thousand White Women: The Journals of May Dodd,” was published in 1998. The novel won the 1999 Fiction of the Year Award from the Mountains & Plains Booksellers Association. It has since sold over 700,000 copies in the United States.

Fergus has also published a collection of outdoor articles and essays, titled “The Sporting Road.” In 2005, his second novel, “The Wild Girl: The Notebooks of Ned Giles” set in the 1930’s in Chicago, Arizona, and the Sierra Madres of Mexico, was published. In 2018, he published “The Vengeance of Mothers,” a sequel to his first novel. followed by “Strongheart” in 2021. Fergus divides his time between southern Arizona and France, where he also is a best-selling author.

The 2022 Golden Quill award was also presented at the luncheon. The annual prize, given to a local author or publication, went to John Anderson, former El Paso County sheriff, historian and writer. His works include: “Sherlock Holmes in Little London: 1896 The Missing Year”; “Rankin Scott Kelly: First Sheriff of El Paso County Colorado Territory 1861-1867”; and “Ute Prayer Tees of the Pikes Peak Region.”

Proceeds from the event benefitted Friends, who support library district programs and needs.

The Friends of the PPLD holds two big book sales per year, typically in March and October.

Scheduled dates for 2023 are

Watch this space for details!

The Friends of the Pikes Peak Library District are now selling books online, through Amazon, Ebay and our web store. The Friends growing online collection features an assortment of both non-fiction and fiction, including history, textbooks, best-sellers and more. Purchases benefit Pikes Peak Library District. Now you can purchase books for yourself and help us provide books for others. Contact us if you have questions.

Join the Friends of the Pikes Peak Library District!

To join the Friends of the Pikes Peak Library District, please complete a membership application or visit our Join Us page.