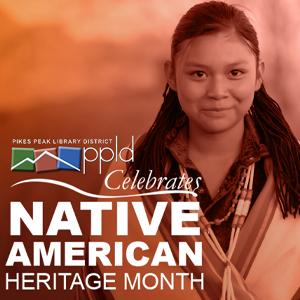 Register your classroom or homeschool family for a live Zoom visit with our APPR Children’s Author Traci Sorell, co-author of Indian No More. A recording of the program will be available for a limited time. Only one registration needed per group for this 60 min. program.

Book Description: Regina Petit's family is forced from their homeland by the government and relocated to Los Angeles in 1957. Regina experiences a completely different life in a big city and learns about struggles, strength, and heritage. 211 pages. For grades 3 - 6.

Contact bhuff@ppld.org to register your classroom or child for a live Zoom visit.

Join Native American storyteller Sebrena Forrest to learn more about Native American culture. She will perform tales from indigenous cultures to educate and entertain as part of National Native American Heritage Month. This program is intended for patrons ages 18 and up.

Born in 1966 on the Crow Reservation in Montana, Mitchelene BigMan enlisted in the U.S. Army in 1986 after working as a firefighter and dockworker. She served two tours in Iraq during Operation Iraqi Freedom and received a Combat Action Badge for surviving a mortar attack in 2005. Mrs.BigMan served as an engineer, EEO advisor, and platoon sergeant before retiring as at Sergeant First Class in 2009.