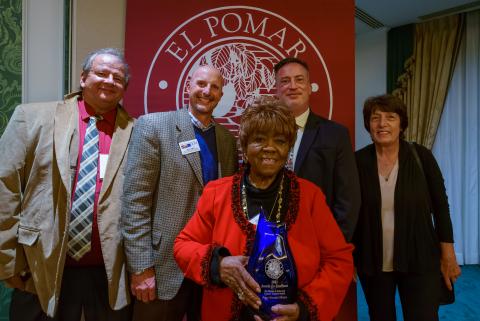 On Friday October 1, 2021 Peggy Houston Shivers was recognized by El Pomar Foundation Trustees as the recipient of the inaugural Excellence in Arts and Culture Trustee Award, which honors an individual who has demonstrated a commitment to the advancement of arts and culture in Colorado. In a ceremony with other Awards for Excellence honorees at The Broadmoor Hotel, Shivers was introduced by El Pomar Trustee Colonel Gail Colvin, US Air Force (Retired), before delivering her own remarks. As a part of the award, a $10,000 grant was given to the Shivers Fund at Pikes Peak Library District.

From a young age, Peggy Houston Shivers studied voice. She was selected by Duke Ellington to be the featured soloist in his Sacred Concert II at Grace Cathedral and was the featured artist for the Bicentennial Celebration sponsored by the United States Embassy in Spain. Peggy also worked in the public school system in the United States, helped develop a program for dyslexic children of American families living in Spain and a crisis line program for Torrejon Air Force Base. She moved with her husband to Colorado Springs in 1979.

Peggy Shivers helped create the Shivers African American Historical and Cultural Collection at the Pikes Peak Library District to address the lack of information about African American history in Colorado Springs. The Shivers Fund at Pikes Peak Library District has also been established to ensure that funds will be available to maintain the collection for years to come. The Shivers Fund sponsors a concert series which allows young artists the opportunity to perform in a professional setting, awards grants, scholarships and financial support to students and provides educational activities to encourage young people to participate in and enjoy the classical arts. A choral group, the Celebration Multicultural Ensemble, has also been organized as an extension of the Shivers Fund. In addition, she has served on many boards including NAACP, Urban League, United Way, Colorado Springs Symphony, Colorado Springs Dance Theatre, Colorado Opera Festival -- where she served as president -- and the Pikes Peak Library District Foundation.

El Pomar Foundation’s Board of Trustees developed the Awards for Excellence program to honor the commitment of Spencer and Julie Penrose to excellence in the nonprofit sector. The program recognizes individuals and organizations from across Colorado who serve their communities with distinction. Honorees are selected by a committee of community leaders, council members from El Pomar’s Regional Partnerships program and El Pomar Fellowship Alumni. Since its inception in 1989, Awards for Excellence has provided more than $6.5 million in grant support to more than 500 nonprofit organizations throughout Colorado.

El Pomar Foundation is one of the largest and oldest private foundations in Colorado. El Pomar contributes approximately $25 million annually through grants and Community Stewardship programs to support Colorado nonprofit organizations involved in health, human services, education, arts and humanities and civic and community initiatives. Spencer and Julie Penrose founded El Pomar in 1937 with the mission to enhance, encourage and promote the current and future well-being of the people of Colorado.