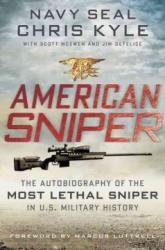 Chris Kyle was nothing more than a simple Texan man who loved hunting and rodeos. All that changed in 1999 when Chris signed up for the Navy SEALs and began BUD/s training. From that moment on, Chris Kyle vowed to protect and fight for his nation, even putting country before family. American Sniper is an autobiography written by Kyle himself, as he talks about his childhood, life before, and after becoming a SEAL. He records life on the battlefield of Fallujah and Ramadi, but also the relations he had with his teammates, both alive and deceased. Kyle is acknowledged to be one of the deadliest snipers’ in American History with a count of 160 confirmed kills. This is one of the most well-written and amazing novels I have ever read and for anyone who didn’t know, Chris Kyle was killed on February 2, 2013 on U.S soil by a former marine, which makes this book all the more honorable and, for lack of a better word, sad. When reading this, you can actually know what the life of a SEAL, or even a militant at that, was like but also that Chris Kyle was an amazing man who gave so much for so little.
Reviewer Grade: 11