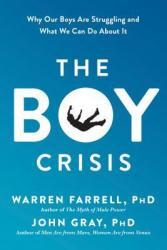 This is a controversial book. Designed as a critique to modern day feminism, Farrell and Gray draw on decades of joint research and experience to debunk the patriarchy and discuss the way that our society is neglecting the needs of young boys and men. They argue that feminism has led to a crisis of education, mental health, and sexuality for boys and men whose needs are not being met.

As a feminist myself, I had a lot of reservations about reading this. I originally checked it out as part of ongoing research for an article I'm writing on cultural standards around masculinity and femininity in the US, but I disagreed with almost everything it stood for. However, I was stunned by how thoughtful and well researched this book is. Instead of being an attempt by privileged men to degrade women or advocate a traditional "women should be in the kitchen" philosophy, this book draws on decades worth of cutting-edge statistics to draw attention to the ways that a gendered society hurts everyone. It explained bias against men in the family court and criminal justice system, and questions the lack of conversation around male victims of domestic violence and sexual assault. These were all things that I had never even thought about or realized were a problem.

If you're anything like me, this is a book that will make you uncomfortable. It will challenge your preconceptions and force you to reconsider entire worldviews you've built your beliefs upon. The book is more than likely to hit the wall at least once before you're finished reading it. However, it will also deeply affect you. I came out of this book with a much more nuanced and well-rounded picture of what gender means in this world. I didn't agree with everything, and I'm still a feminist through and through, but I now realize that feminism is for men too. Gender equality is so much more complicated than what first meets the eye.

This book a must-read for anyone who's interested in gender politics. My biggest criticism (and the reason I didn't give it five stars) was that it often went off topic, particularly in the mental health section, and often discussed homeopathic remedies to ADHD and other things that felt irrelevant and detracted from the main message of the story.