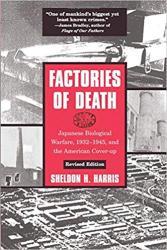 This book is for the historian who wants to know more about what happened in the world in the 1930-1940's. We all know about WWII. Most of know about the Nazi Concentration camps. A few know of the human experiments done by the Nazi's. But did you know that Japan was doing human experimentation as well? Did anyone know that Imperial Japan was active in Bacteriological and Chemical Warfare? This is an in depth look at the people behind the atrocities and those behind the cover-up. The author even talks a little about why we know little about Japanese human experimentation and a lot about Nazi Concentration camps.

I found this book enlightening and thorough. My overall view of the world during this time period is filling out and becoming more complete.