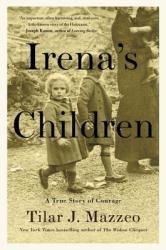 This book tells the true story of Irena Sendler, a Polish woman who saved 2,500 children during the purging of Jewish people from Warsaw during World War II. This book details the trials and tribulations faced not only by Irena but the people and children of Warsaw. The underground network formed by Irena and her many friends allowed thousands of children to be placed with different families and continue living rather than being sent to German camps. I was truly awed by the courage described in this book and the measures taken by the people of Warsaw to save the lives of children who weren't even theirs or their friends. The horrors of World War II are indescribable but the necessity of remembering it is imperative, especially when stories like this are nearly unheard of