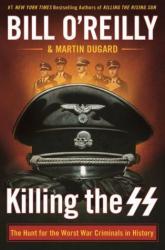 Bill O'Reilly and Martin Dugard are known for writing some fantastic historical novels, and Killing the SS upholds that idea. It is the latest installment in O'Reilly and Dugard's Killing series. This novel tells the story of the global postwar hunt for Nazi war criminals and how they were brought to justice, or how they escaped altogether. The big four written about were Josef Mengele, known as the Angel of Death, who was the physician at Auschwitz and performed horrific medical experiments on the prisoners; Adolf Eichmann, charged with managing the mass deportation of millions of Jews to death camps; Martin Bormann, who was in charge of legislation and domestic matters regarding Nazi Germany; and Klaus Barbie, who was known as the Butcher of Lyon due to the fact that he personally tortured and killed thousands of Gestapo prisoners in Lyon, France. The book itself is a fantastic read, as it is suspenseful, engaging, and is the history buff's dream. I would recommend this novel to anyone who loves history, or anyone who is a fan of the Killing series.