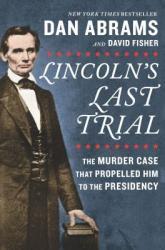 Lincoln's Last Trial was a fantastic read and I could not recommend it more. The book follows Robert Roberts Hitt, a steno man - one who records what is said during a trial. His latest job is a trial where Peachy Quinn Harrison was accused of murder. Abraham Lincoln, a well-known lawyer, is hired to defend him. This trial's victory is what ended up launching Lincoln into the presidency, and was the presidential candidate's last murder trial. Everything said in this book is true, but it is written in the style of a fictional book, making it an easy read for anyone. As the author follows Hitt in the buildup to the trial and during it, he discusses various things relating to the events occurring at the time. This makes the pace of the book fairly slow, as lots of information is given in-between events, but it is certainly worth it. Lincoln's genius as a lawyer, the advice he gave to law students, and details only his friends would know (he kept papers for cases in his hat!) are all revealed. Overall, I would definitely recommend this book, especially if law, history, and government are of interest.