Book Review: Narrative of the Life of Frederick Douglass, An American Slave 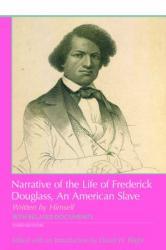 The Narrative of the Life of Frederick Douglass, an American Slave by Frederick Douglass illustrates Douglass's life during slavery in Maryland and his attempts to make it to freedom. This narrative demonstrates the horrific situations/events and the terrible way slaves were treated throughout the time period of slavery way deeper than the average history text book. The narrative is extremely informative about life's of slaves since it goes into specifics about slaves being born, their living quarters, amounts of food, the masters, etc. It is very difficult to relate to or know exactly how a slave was treated in this time period; however, this book allows readers to understand the hideous and fearful actions that were taken against these human beings. This narrative brought tears to my eyes and shocking expressions to my face when reading certain real events that took place. Overall, I really enjoyed this book and it was extremely well written because it allowed me to see more than what is taught in an American History class because Frederick Douglass goes so in-depth about his experiences in slavery throughout the narrative.