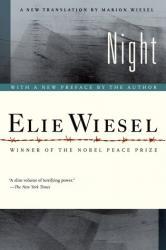 Night, by Elie Wiesel, tells of the story of the main protagonist Eliezer and the many tragedies he faced in German concentration camps during World War II. The protagonist narrates the entire book in a first-person and unbiased manner, which exposes the emotional truth of the Holocaust and provides an autobiography of the real author’s experience during the war. Eliezer, the main protagonist and counter part to the real Elie Wiesel, is forced to approach his ever-changing relationship with friends and family, many conflicts and struggles, and a plethora of situations that threaten his existence throughout the book. His reactions to these various obstacles exhibit the Holocaust survivor’s unique traits that set him apart from other Protagonists. Like Eliezer, every character in the book is developed fully with vivid traits that the real Elie remembers about them. The autobiography is fascinating and tells a compelling story while informing the reader about what really happened during the Holocaust, and I would reccomend it to anyone.