Book Review: Running for My Life 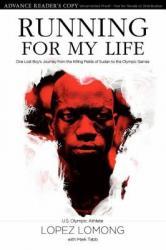 Lopez Lomong is a phenomenal runner. When he runs, he feels as though he is free and it is the one thing that gives him immense amounts of joy. However, Lopez didn't always start out in the spotlight. In fact, his story begins in a South Sudanese war camp. "Running For My Life" is the incredible story of one boys journey from awful refugee camps to the 2008 Beijing Olympics. This nonfiction story is told through Lopez himself making it a thrilling autobiography. I personally love this book because my brother was an Eritrean refugee and when he came to America, he got a scholarship for running. I don't know what it is about that particular sport, but it definitely changes lives as shown through Lomong's book. Even if you are not a fan or sports or running, "Running For My Life" teaches valuable lessons and helps us to empathize with others. It shows that love can be found everywhere in the world. Trust me when I say that you will not be bored with this book. Lopez constantly has a good attitude in life even if his best meal of the week is eating out of a trash heap (which actually happens in his refugee camp). Lopez goes with his friends to watch the Olympics on T.V at a rich man's house back in South Sudan. He sees a man holding the flag of America, tears streaming down his happy face. From that moment, Lopez decides that he wants to be that man. He wants to win an Olympic race and make his country proud. I mean he already has the running skills considering that the boys in the refugee camp have to run 18 miles in order to go play soccer!
Lopez has a spiritual journey throughout his life and his faith never wavers. Three older boys helped Lopez escape a war camp when he was six. When they got to safety, the boys disappeared. Lopez is convinced that the boys who helped him were angels. This story like no other will move you and inspire you to follow your dreams. Lomong proves that no matter who you are or where your from, you can do anything through Christ who gives you strength.