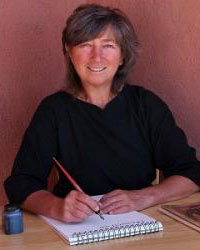 Pat Musick grew up in the house her father built at the edge of the Garden of the Gods. Her earliest artistic influences were her painter father, Archie (a Broadmoor Art Academy artist with local murals in the City Auditorium, Fine Arts Center, and Manitou Post Office); her ceramist mother, Irene; and the wildlife, plants, and landscapes of the Southwest. An introduction to the book arts at Reed College led her to postgraduate work researching early Irish manuscript calligraphy in London, England, where she first encountered enameling (glass fused to metal at high heat).

She returned to Colorado Springs in the 1980s, taught art at The Colorado Springs School for four years, and has been an adjunct art instructor (PPCC, CSU-Pueblo, UCCS) and freelance artist (enameling and mixed media) since then. Her work has been exhibited at museums and galleries across the United States and six countries; she has carried out many public and private commissions (including three glass-on-metal murals for Colorado’s Art in Public Places program) and served as Artist-in-Residence at Grand Canyon and Petrified Forest National Parks. She has served on the TOPS Working Committee and the Art Commission of the Pikes Peak Region.

Travels that inspire her work range from wilderness backpacking to viewing masterpieces in situ in Europe and Asia.