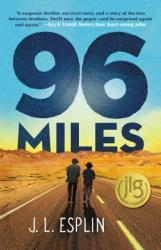 John and Stewart’s father is a survivalist. At their home in a remote part of Nevada, they have everything they need to sustain them for six months – water, food, gas, even a generator to keep the refrigerator running. So when the power goes out for half the country, the brothers aren’t too worried, even though their father is away. They’re doing better than a lot of other people who weren’t prepared. But then, a group of men come in pickup trucks and they take everything. They force John and Stewart to kneel on the floor at gunpoint and one man tells John, “I’m sorry, kid, but we need what
you’ve got.”
Now, their only chance for survival is to walk 96 miles in the blazing desert heat to a friend’s ranch. There’s also a time limit. It’s important that they make the trip in three days - no longer than that – and Stewart won’t believe that he’s not going to die.
Then they encounter another set of siblings, Cleverly and her younger brother, Will. Cleverly decides that her best option is to join them, but John is not certain whether having Cleverly and Will tag along will help or hurt his chances to get Stewart to the ranch in time.
Every day is a struggle to find food, drinkable water, and to keep Stewart on his feet. Together, the four of them experience the desperate things that people feel justified to do in times of crisis and the best and worst of human nature, both in themselves and in others they find along the way.