Book Review: The Accidental Billionaires: The Founding of Facebook, A Tale of Sex, Money, Genius, and Betrayal 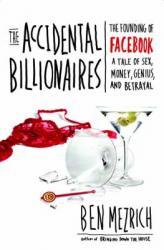 Upon a recent re-watch of The Social Network (2010), I came to the realization that the story was based on the book, The Accidental Billionaires by Ben Mezrich. In standard fashion, I put this book in my “to read” list and waited until the audiobook was available. Even though both the book and the movie were created shortly after the meteoric rise of Facebook into the mainstream, the story is still intriguing and captivating. In fact, I think the strength of both works is due to the irony of the whole situation: an anti-social computer genius creates the largest social network ever.

While the book doesn’t use Mark Zuckerberg’s legal troubles as a framework to break up the story as the movie does, both hold very closely to the same narrative. The one thing the book manages to emphasize more than the film is the “romantic” aspect of the whole endeavor. Essentially told from Eduardo Saverin’s perspective, the impetus to attain coveted social connections so as to increase the chances of meeting girls is made clear right from the get-go. The fact that college is the best place to do this is probably why the events of Facebook’s creation (as well as the Winklevoss’ failed website) took place there.

Partly because this story is so incredibly entertaining (in a soap opera drama kind of way), I do have my doubts about the accuracies of its plot. Because depositions and other legal documents comprised the majority of the research, some of the inner thoughts of the characters remain the speculation of the author (except Saverin, who provided consultation for the book). Nevertheless, Zuckerberg’s genius is evident in this book, especially since the portrayal of his character is a mostly apathetic computer programmer who wasn’t out to create “the next big thing” but instead saw a gap and ably filled it.

An enthralling story of one of the most culture-changing inventions of our lifetime, I give The Accidental Billionaires 4.5 stars out of 5.

For more reviews of books and movies like this, please visit www.benjamin-m-weilert.com