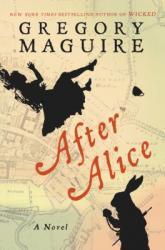 The book follows Ada (Alice's friend who does rate a mention in the original) as she tumbles down the rabbit hole after Alice (see what Maguire did there?). In between chapters about Ada in Wonderland, we follow the goings on of Ada and Alice's families above ground. I wanted the book to be Alice in Wonderland meets Downton Abbey, and that is definitely not what I got. The parts in Wonderland were ok, though Ada's character was never developed, and as such, I didn't actually care if she was stuck in a zoo forever with the White Queen or whatever. The above ground parts were painfully boring - even though Maguire added Darwin as a character, which could have been fascinating! We basically follow various housekeepers and Alice's sister Lydia as they traipse around searching for the lost children. Exciting it was not. There was also a ton of completely pointless social commentary - for example, its not exactly shocking that there would be lots of racists in Victorian England.

Oh, and to add insult to injury, Maguire writes as though he's just ingested a thesaurus.

This is the second Maguire book that I've read and hated (I was not very fond of Wicked either), so I believe it will be my last. 1 star.