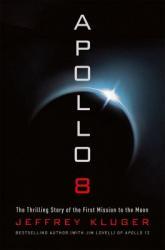 In August 1968, NASA made the bold decision to win a major battle in the Cold War by launching the first manned flight to the moon. President Kennedy's deadline of putting a man on the moon by 1970 was fast approaching, but Frank Borman, Jim Lovell, and Bill Anders were up to the challenge to make a huge advancement in order to meat the deadline. Apollo 8 tells the full story of the mission from Mission Control to the astronauts' homes, from the test labs to the launch pad. Apollo 8 also gives a summary of the Mercury, Gemini, and the other Apollo missions and talks about the science behind the mission in an easy to understand manner. From the coauthor of the bestselling book about Apollo 13, Apollo 8 is a thrilling yer informative tale and a great resource to have. I highly recommend this book for anyone in high school or older who is fascinated by the space program or is doing a project on anything related to NASA.