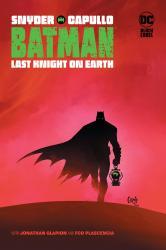 Batman: Last Knight on Earth is the stunning end to Scott Snyder and Greg Capullo's epic Batman run. This amazing comic ties in things from all over Snyder and Capullo's run, from The Court of Owls to Endgame to Bloom. In this story, set sometime in the future, Bruce Wayne wakes up in Arkham, to discover that the world has drastically changed from what he remembers. Earth is now basically an apocalyptic wasteland, and Gotham City is now being controlled by a mysterious villain called Omega... And so Bruce sets out on a journey to try to find out why the world is like this, and to take back Gotham from Omega. As a huge fan of Snyder and Capullo's run, I really enjoyed this comic. This story can function on its own, but really its the continuation, and the end, of the New 52 Batman series, and this story especially ties in things from Endgame and Superheavey. (Batman Vols. 7 &8.) Like the Court of Owls story, this comic was also a mystery story, because Batman has to gradually piece together the why the world is like this, and he also begins to discover who Omega is... Snyder and Capullo make an epic finish to their amazing run.