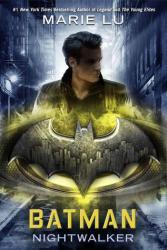 In "Batman: Nightwalker", the early years of Bruce Wayne is retold in the style of a YA novel. Years after the death of his parents, Bruce struggles with loss, a sense of purpose, and the empire he has just inherited. When a string of mysterious crimes pop up in Gotham City, he soon gets tangled in the web.

First off, when I started this book, I didn't actually know much about the Batman universe, but it was easy to catch up -- especially considering it takes places years before Bruce's story actually begins as Batman. However, I have read Marie Lu's work before, so I had a general idea of what I was getting into. There are quite a few things I liked about this book: the plot was intricate and engaging, the protagonist was likable and interesting, and the twists and turns were really well executed. But, what kept me from giving this book five stars was the writing style. Normally, I really enjoy Marie Lu's writing style, but this book was different than her other work. The dialogue often felt really unnatural (especially when it came to Bruce and his friends). There were lots of lines that I thought were cheesy or robotic and that pulled me out of the story. Had the writing flowed a little more and the dialogue been more natural, I would've definitely given this book five stars. But, I would still recommend it because, despite the flaws, I really enjoyed it for its elaborate, high-paced plot.