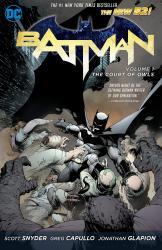 In Batman Volume 1: The Court of Owls, writer Scott Snyder crafts an interesting mystery for Batman to solve. And while Snyder's storytelling is great, so is Greg Capullo's artwork. I really enjoyed this comic, and I liked the mystery of the the Court of Owls. In the comic, Batman discovers that a mysterious organization has been ruling Gotham City from the shadows for years, and he has to take them down. This excellent Batman story introduces new characters, such as The Talon and Harper Row. One of favorite parts of this comic was that instead of just fighting criminals, Batman has to solve a mystery. The Snyder and Capullo Batman series is one of my favorites, and in my opinion, Batman Vol. 1: The Court of Owls is one of my favorite comics I have ever read. I think that this volume is a great start to Snyder and Capullo's run on Batman.