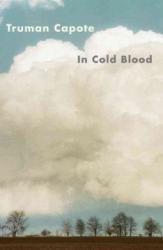 Holcomb, Kansas 1959, the Clutter family was brutally murdered and no one knew who or why they did it. Truman Capote wrote this book as a novel, with dialogue between the murderers and the family; although he was not there, he gathered as much information about the murder as possible and was able to turn it into a book instead of a document. Moving on, the story follows the life of the Clutter family before and after they were murdered, however it focuses more on Richard Hickock and Perry Smith, the murderers of the Clutters. In need of cash, and fast, Hickock calls his old jail friend Perry Smith and they decide to execute a robbery of the Clutter family, who they thought were rich. After invading the house and finding no cash, they dispose of the Clutters, rid of the clues, and escape the law for as long as they could. I love this book since it enables the reader to have a mystery going on in their head and also because murder was uncommon back in 1959, so it enables the reader to feel how it was to hear of a major crime, such as this, back then. I recommend this book to every reader out there, it was very well written and one of the most amazing “New Journalism” type of books, as Capote said.
Reviewer Grade: 11