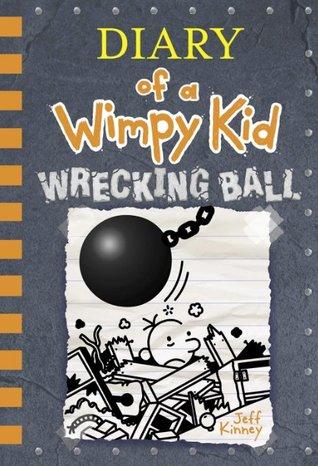 The book, "Wrecking Ball," the main plot doesn't start immediately. First there are a couple of stories including a garage sale and a segment talking about how rich he would be when he grows up. When you finally get pass this entrance into the book, we can get to the beginning of the main plot. Greg Heffley and his family are initially devastated to find out that their Great Aunt Reba had died, but then they found out that she had left them a decent amount of money. This of course started to make them argue over what to do with it. Each suggested their own idea, but the mom's idea of expanding the kitchen won out despite unpopular response because she, quote on quote, was the only one who ever wrote Great Aunt Reba any Thank You cards. Nothing seemed like it could go wrong, the expansion began, and the family began to actually get excited about a bigger kitchen. But as you probably already know in these books, something goes wrong, but this time, everything goes wrong. Trash and concrete moving into the neighbors yard, toxins in the walls, and wasps getting into the house. The neighbors by this point were obviously not the agreeable type so when they found out that part of the extension was on one of the neighbors property, they had to take the extension down. The family hit down by this failure, decides that instead of improving the house, they're going to move to a new one in a new school district. Will this work out? Will Greg and Rowley stay friends? I guess you will just have to read.

I liked this book because it was a new story that didn't have any similarities to the previous books like some of the other stories have. I didn't dislike this book, but it was a fairly mediocre read for me and it didn't amaze me. I chose this book because I have been reading the series since I was young, and I enjoy getting the new book in the series when a new one comes out. I would recommend this book to anyone really who likes a good easy story to read before you fall asleep at night.