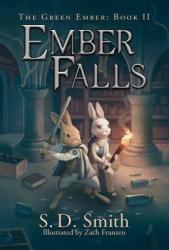 Being a fan of children’s series like The Chronicles of Narnia, as well as a lover of rabbits (owning two Flemish giants as pets), I was glad to get back into the Green Ember series with the second book, Ember Falls. Obviously, as this series is mainly geared toward children, there were a few points of the plot of this second book that I either predicted from the start or could see coming from a mile away. In any case, the world building that continued with this book was top notch, despite certainly feeling like a “linking” part of the series.

While The Green Ember could stand on its own and laid the groundwork for the books that came after it, Ember Falls certainly needs its predecessor to make sense. It also seems to rely on the next book in the series to reach some conclusion. This is an issue that often arises in book series. The saga of the story as a whole (across numerous books) is prioritized over focusing on a complete plot for each book. Don’t get me wrong: I still want to see where this series goes; however, it’s a little infuriating when I don’t have access to the next book in the series yet.

Ember Falls inherits a lot of what I liked and disliked about The Green Ember. This is likely going to be the case for the series as a whole. The individual characters are well-rounded and have clear motivations. However, the fact that they are rabbits seems to be often overlooked. These characters mostly act like ordinary people and only occasionally use their unique lagomorph attributes to advance the plot (same goes for the enemies as well). Other than that, this is certainly a series I’ll be reading to my children someday.

An adequate progression of the Green Ember series, I give Ember Falls 4.0 stars out of 5.