Book Review: Of Giants and Ice 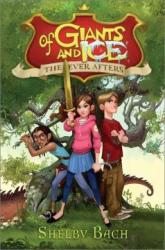 I adored this series in middle school. Now that I'm older, I'm better able to recognize that it isn't exactly high literature, but it was fun to read. Putting a twist on middle grade and YA fiction's beloved fairy tale retellings, in Of Giants and Ice, main character Rory discovers she's a "character" when she joins Ever After School, which is supposedly an unassuming after-school program but actually a school where characters go on missions and eventually end up in "tales." As the name suggests, tales are when characters become characters in a fairy tale. Rory and her two friends, Chase and Lena, are thrown into a Jack and the Beanstalk tale, but discover there's something waiting for them that's more sinister than just giants. Of Giants and Ice follows a fairly typical middle grade fiction structure, with a "chosen one" middle school protagonist on an adventure with some friends and eventually solving a massive problem that, for some reason, the adults are incapable of handling without the help of kids, but it's an entertaining read with a fun premise. I would recommend for younger readers who are looking for something light and diverting.