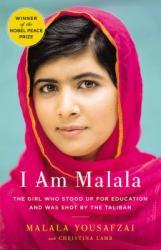 "I Am Malala" was a pretty great book, and is now one of my personal favorites. It did not take me long to read and is good for anyone ages 12+. This book does contain some sensitive contents and might not be great for younger kids, unless the parents are okay with harsh and sad topics in the Middle East. The book does not contain a whole lot of content on what goes on in that area of the world, and it mostly focuses on Malala and her story. Malala is a young teen from the Swat Valley in Pakistan. She was raised peacefully, but the Taliban soon started to take over the area. The Taliban started like a little seed, but grew into a giant weed that basically controlled everything. They eventually made it so girls were not allowed to go to school, and women were not aloud out of their house unless they are accompanied by a male relative. Malala would not put up with this, for she has a desire to learn and know answers to her questions. She is the daughter of the principal of her school, and grew up admiring the students that attended. After surviving a bullet to the head, months in the hospital, and a move to England, Malala becomes activist and stands up for girl's rights and
her belief that everyone has the right to go to school. I liked this book because Malala is a great role model and author. She really provides a strong figure for any girl growing up in this hectic world. This is definitely one of the best books I have read and I am sure I will read it again in times to come. Any girl (or boy) can relate to Malala because she described herself as being an ordinary girl that wanted to see change in the world. She shows that anyone can adjust their view on the world if they just use their voice to speak out. I absolutely suggest this book to someone if they are looking for a fairly quick read!