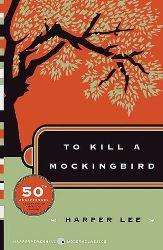 Six year old Scout Finch is living in the small town of Maycomb, Alabama during the Great Depression. Raised by Atticus Finch, Scout and her brother, Jem, are very comfortable with Maycomb and understand the well being of their neighbors, except the house of the mysterious Arthur Radley, whom they obsess over. Half the book is basically about Scout, Jem, and Dill (their new friend) trying to lure Arthur Radley out of his house. However, when Atticus, a lawyer, decides to take the case of a black man named Tom Robinson, tensions become high and the trial to see whether Tom Robinson is guilty or innocent based on his crime and, especially, his skin color is at stake. I absolutely love To Kill a Mockingbird by Harper Lee and it is my #1 favorite book because the structure of this book is so eye-opening since it addresses the struggle and tensions between African- Americans and Whites during a time period where slavery was abolished just less-than a century ago. I highly recommend this book because it is just so jaw-dropping and it hit me with surprises that had me at the edge of my seat.