Fountain Library is closed due to an internet outage.

Shadow of the Fox 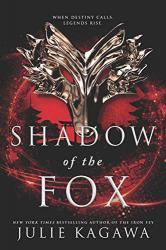 Every 10,000 years, an ancient dragon rises to give one mortal a wish (in exchange for their soul) and the world changes. Two characters, a kitsune-hybrid and a ninja, find themselves trying to keep the path to the dragon out of the hands of several interested and nefarious parties. Shadow of the Fox follows our heroes as they travel to and from different monasteries dodging monsters in their quest to protect ancient scrolls.

Shadow of the Fox was a ton of fun! It gave me Percy Jackson vibes, but was definitely for a slightly older audience and the mythology in this book was Japanese, which I found to be very cool. I liked both of the characters – the kitsune must hide her fox nature from her ninja travelling companion as he is a monster killer, and kitsune are a type of…if not monster, then non-human trickster. The ninja is trying to resist becoming possessed by the evil demon that occupies his sword. Their relationship is thus a bit fraught, but adds a really interesting dynamic. Their other travelling companion (a disgraced Samurai who spends most of the book amusingly drunk) provided some levity. Some of the mythology was completely new to me, which made for a engaging reading experience. I liked it enough that I read one of Kagawa’s other books, The Iron King, as well. If you enjoyed that one, you’ll likely like this – I found the formats to be similar, though I personally found the Japanese mythology more interesting than the fairies.

TLDR: This is a really entertaining and action packed fantasy for fans of Percy Jackson and Kagawa’s other books. I loved it, and am excited to get my own copy! 5 stars.

Thanks to Harlequin Teen and Netgalley for the eARC, which I received in exchange for an unbiased review. Shadow of the Fox is available now!