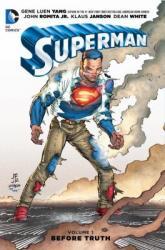 In this Superman comic written by Gene Yang, Superman is being blackmailed by a mysterious agency (or person) called HORDR. He's also got a new ability (solar flare) that destroys everything in his immediate vicinity, but that leaves him human/vulnerable for the 24 hours immediately following the flare's use.

Even though this is labeled "Volume I", the issues in it are marked as 40-46. As such, the first issue was super confusing. It took me a hot minute to figure out what was happening, but basically, the Justice League was testing Superman's new power: solar flares. Honestly, you could skip it and be fine.

Anyway, so after that bizarre first issue, we enter the main story. I think it's my fav Supes story (I mean, it's the first one I've read, but I've seen *some* of the movies), just because in my opinion, Superman is usually a little over powered (OP), which makes him a lot less interesting as a character. It was nice to see him being a human, and we get a few cute moments as a result (hangover!). The story has a nice, easy to follow progression, the characters (for the most part) act in ways that make sense, and the last issue leaves the door WIDE open for future issues. If you have no knowledge of Superman, it would be really hard to follow. Movie watchers will be fine, but if you are totally new to Superman, start elsewhere.

This might be really stupid, but I hated Superman's costume update. The jeans just looked silly. Like, go full tights/ridiculous superhero costume, man, or just do nothing at all. Also, like, shave or don't shave, don't walk around with that spiky stubble all the time, it's distracting.

Somehow worse costume aside, I liked this Superman story, and I'll likely check out the next volume. 3 stars - it was pretty good.