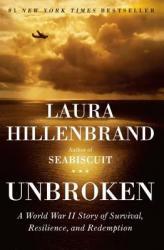 Unbroken, is a book of suffering, friendship, strength, and journey's throughout life. The story takes place in the Pacific War of WW2, following the struggle of Louie Zamperini. Louie's life starts out "untameable" drinking, stealing, and running from the cops at the early age of 10, he cause quite the mischief in his home town of Torrance, California. Later on in high school Louie is going down the wrong path, until his brother turns him around and sets him on the path of becoming an Olympic runner. Louie runs in the 1936 Berlin Olympics and places 8th. Next thing you know World War Two breaks out, Louie joins the Army Air Corp and becomes a bombardier of a b-24 plane.

Next in the story, whilst on a rescue mission the "Green Hornet" a faulty B-24 crashes into the pacific ocean, taking Louie and his flight crew with it. Mac, Phil, and Louie survive the initial plane crash and face many challenges at sea. Mac dies along the way, but Louie and Phil survive 47 days at sea before being captured by the Japanese. Phil and Louie are quickly put into a Japanese p.o.w camp, where they are abused, tortured, overworked, and starved.

To avoid spoilers, I won't go further into the story, and if Louie and Phil survive or not. I HIGHLY recommend this book, it's a great eye opener for PTSD, and the Pacific side of WWII, along with intense suspense, struggle, and development of the main characters. Laura Hillenbrand does a great job or portraying this hero and survivor's story.