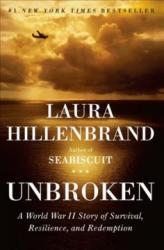 Unbroken (teen version) is a well crafted biography written by Laura Hillenbrand. Unbroken tells the story of Louie Zamperini, an Olympian and bombardier of World War II. Louie was mischievous and trouble-making as a young boy until his older brother, Pete, introduced him to running. As Pete urged Louie into the sport of running, Louie began to desert his old ways and commit himself to running. Louie soon was at the top of his school in running, setting new records and winning numerous races. Louie’s skill carried him all the way to the 1936 Berlin Olympics. Reaching the strongest point of his life, Louie hoped to travel to Tokyo for the following Olympic games. Unfortunately, terror came and his dreams were to be put on hold.
World War II struck, causing Louie to enter into the Army Air Forces as a bombardier. Louie and his team of airmen faced many near death experiences.
Although these were blood-curdling situations, none would compare to what Louie was soon to face. On a rescue mission in May of 1943, Louie’s plane crashed. The crash led to a terrifying and unfathomable journey on which Louie survived life on a raft and the wrath of Japanese guards of the POW camp he resided at. Louie went through incomprehensible pain from being beaten by his captors, having to perform forced labor, going through starvation, and constantly battling a sickness. He was also robbed of his self-esteem and was treated like he was worthless. Consequently, Louie’s story is breathtaking and intriguing. Unbroken provides insight on the torturous lives of POW during WWII and the determination and perseverance of many during WWII.
I highly recommend this book to anyone who is a WWII buff, history lover, or is in search of a thrilling and breathtaking story. I enjoyed it because I am interested in learning about World War II and I found the book to be moving.
Unbroken is fascinating and is not dull or boring. The book will leave you wanting more and you will find it hard to put it down. However, I found the beginning part to be a bit uninteresting and tedious, as it told about the planes and equipment for World War II. Once that part is over, though, the book is quite exhilarating. I would caution that younger children should not read the book, as there are some graphic and gruesome scenes of how the POWs were treated. I would suggest the book for teens between the ages of 13-16, since there is an adult version of the book for those older than these ages.
Unbroken is one of my favorite books, and anyone who is interested in history or is seeking an electrifying story should read it.
Reviewer Grade: 9