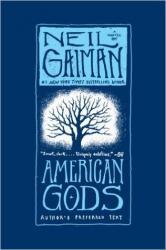 This book follows ex-convict Shadow, once he is released from prison and enters into a new job as the assistant to Mr. Wednesday (more commonly known as Odin). Shadow doesn’t believe the fact that he is surrounded by gods, until Mr. Wednesday introduces him to god and god and shows him undeniable evidence. Mr. Wednesday is using Shadow as a mean of amassing the older, more forgotten gods into an army ready to retaliate against the new gods of the modern era. Technology, for example, is depicted as a god, but a socially removed and young god. This has been one of my absolute favorite books to read because of how it explores the change in worshiping from ancient gods and folklore into technology, media, and trends. The book is so complicated because it brings together ancient gods of cultures from around the world.

Each have different origins and purposes, and the role Shadow plays as the representation of humanity only intensifies the surreal feeling of the book.
I liked how I was able to relate to Shadow, as bring subject to the controlling factors of society, whether they be demanding gods or media outlets. I appreciated how well-researched the cultures written about were, and how there isn't a page in the book that doesn’t bring about another point to think about, something like morality or control. The book is also very entertaining and a fascinating storyline, and I would highly recommend it to any reader. I would give it five out of five stars.