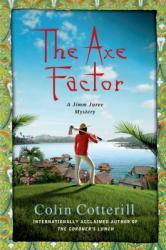 Being cooped up with her eccentric family in a rural village on the Thai coast, Jimm Juree longs for something thrilling and interesting to happen in her life. And lo and behold, she gets it. She is assigned to interview a local European crime novelist named Conrad Coralbank (I legitimately almost wrote Colin Cotterill when typing this review up). At the same time, she finds herself in the middle of solving the disappearance of local doctor Dr. Somluk, who never returned from what was supposed to be a three-day conference, as well as the wife of Conrad Coralbank. All of this looks very suspicious to Jimm's family, who notice Conrad's disturbing attraction to Jimm quicker than a cheetah can run. With a monsoon headed their way, and a potential serial killer threatening Jimm's life, it seems like Jimm's entire world is in for some serious changes.

When I first read this book's description, I didn't have high hopes for it, given that the culprit seemed to be painfully obvious from the start. Half the fun of a mystery novel is figuring out who the culprit is, so having the culprit be handed over to you is a huge blow. With that taken into account, while I was intrigued by the book's premise, I felt like the book wouldn't have much to offer in terms of a thrilling mystery. But I was so, so wrong! The tension in this mystery novel is unlike any I've ever seen before, and the characters are written exceptionally well. Also, be prepared for a huge plot twist at the end, because Colin uses the obvious culprit facade to bring a plot twist you will not see coming. The climax was one of the best parts of this entire novel, not only because of the plot twist and how action packed it was, but because of how funny it was. I kind of want to see a climax similar to it in a Jaine Austen mystery. Just super saiyan. However, this book does have some major problems with dialogue. There weren't enough breaks to tell us who's talking, making the dialogue very confusing to read. The setting of the dialogue is also often made very unclear at first, and there are little interactions with the environment in the dialogue, making the dialogue seem like it's in a vacuum. But even with these dialogue hiccups, this is a book I highly recommend you check out. I'll be back again for books by Colin Cotterill soon, hungry for more.