Book Review: Big Nate: In a Class by Himself 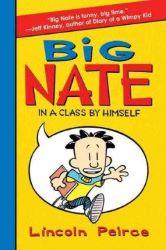 Big Nate, or Nate Wright, is a boy who has to deal with an arrogant teacher suck-up Gina, his perfect sister Ellen, who, Nate says, adults are too short-sighted to see how annoying she is, and a number of teachers including the worst one of all, Mrs. Godfrey. She apparently fails to recognize that despite his lack of knowing anything about history, or really anything else academic, that he is destined for greatness in the future. Nate feels though that at the current stage in his life, 6th grade, he can't do much about people not realizing his greatness, especially when surrounded by misguided teachers, his clueless father, or his joking best friends Francis and Teddy. Luck strikes when Nate didn't eat breakfast and one of his best friends Teddy offers him a fortune cookie. Most of the time Nate wouldn't get anything worth thinking about, but this time is different because, "Today you will surpass all others." As soon as he gets this, He realizes that the only place that he will surpass all the others is at school because at home the only people he could surpass is his clueless dad and his annoying sister. Because of this, he tries every class out of the day to make it happen, causing him to land seven detentions throughout the day. Will Nate Wright be able to surpass all of the others, or will he be in detention, "In a class by himself."

I liked this book because Nate seems to not understand very much about what he should do in the world, so this means that he will inevitably make his own funny decisions. The only reason that I didn't like this book as much was because it was the first in the series and I just didn't feel like it was the best one out of them. I picked this book because I had already read some of the other books in the series, (I read them out of order,) and I decided that I probably should read the first one to see how the story began. This book surprised me because I had no idea what the "origin story" could possibly be for this kind of a character, but if I would have guessed, the story would have exceeded my expectations. I have read many books like this, this year so sadly I can't say that it is one of the best ones that I have read this year.