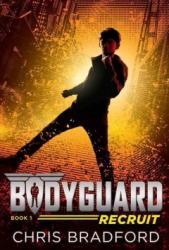 Connor Reeves is in the Battle of Britain Junior Kickboxing Tournament champion with a promising career ahead of him. All of that changes when he sees a kid being beat up in an alley. With his father’s selfless blood running through his veins, Connor doesn’t hesitate to come to the victim’s aid. One fight later, he goes with some cops who invite him to join a secret organization called Guardian. Guardian specializes in the protection of high-risk, wealthy targets. Everyone is shocked when his first assignment is to protect the President’s daughter, after barely any training. This book is filled with suspense as Connor solves the clues to rescue her. I would highly recommend this book and book series to all middle school readers.
Reviewer Grade: 8