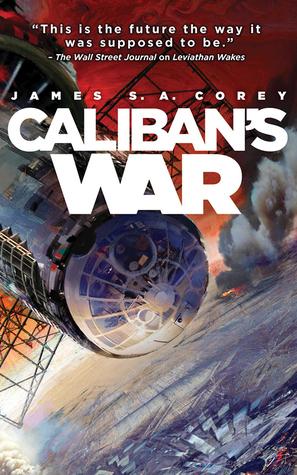 Caliban's War is the second book in The Expanse series. It continues with Earth, Mars, and the Outer Planets with high tensions after barely avoiding interplanetary war with the destruction of Eros. When a figment of the planet-destroying protomolecule tears through some Martian marines, war once again becomes a possibility. Will a disillusioned crew, a grieving scientist, a stubborn UN officer, and a self-destructive Martian be able to find the truth, or will war and violence and alien evolution consume them all?
This book is as good as the first book. That's high praise, since the first book was very, very good. It continues the somewhat difficult experience of lots and lots of characters in lots and lots of places, but I feel like this novel was a bit easier to digest since most of the worldbuilding was out of the way. The characters also pick up smoothly from last time, with the effects of the last book's events heavily influencing them and their actions. The way they interact with this world, their situations, and each other is so organic and complex that I found it hard to feel I wasn't reading about real people. I also like how the author lets so many of her characters hate or dislike each other while still juggling all their perspectives in different chapters. It is such a treat to see through one character's eyes while they do something they think is perfectly normal and rational, then pivot to another character's point-of-view that sees the first characters actions as completely stupid. While the new cast of characters was initially overwhelming after the amount of emotional investment that was steeped into last book's characters, I found them extremely interesting and fun. They were all completely different from one another, and gave so much variety to the way we see the story. Once again, the realism of this series is striking. Even if every little political nuance isn't picked up, we can still follow the general vein of alliances and rivalries as well as we follow them in our world. It almost feels like reading a historic fiction book, with every plot point a mirror to similar groups and events in our own history. Finally, the plot of this book was very solid. There was some dragging on the beginning, and the ending wasn't nearly as climactic as the first book's, but it was still a wonderfully gripping and satisfying story.
All in all, the Expanse story remains a tour de force with Caliban's War, and I can't wait to see what the next story holds. I would recommend this to anyone who loves great sci-fi, lovable characters, and a plot that's out of this world!
Reviewer Grade: 12