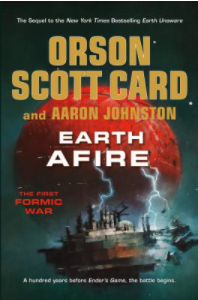 It's odd how the main ideas presented in the original Ender Saga have almost no depictions of combat or war in them at all. It is then appropriate that the second book in this prequel trilogy pulls out all the stops and shows what a horrific battle against ant-like aliens would be like in the not-to-distant future. After all, war is hell, and the atrocities committed by a species trying to terraform Earth to their specifications are quite gruesome.

Fortunately, Earth Afire does not focus too much on the gory details of war. There are still subplots being explored that bring realism to this doomsday scenario—like needing to go against orders and bureaucracy to save people. The reader finally gets to spend some significant time with Mazer Rackham, who is absolutely the most interesting character in this prequel trilogy. His story is where Earth Afire really shines. Sure, there are still some leftover characters from Earth Unaware who stick around to continue their plotlines, but the events happening on the ground are much more interesting than outer space sabotage.

While I feel Earth Afire has some strengths over its Earth Unaware, ultimately it's the downbeat middle book in a trilogy that focuses on the destruction of Earth. There is still hope for humanity with a few last-ditch efforts, but it's clear the Formics have the advantage on so many levels. Also, being a prequel book, Earth Afire suffers somewhat from the fact that we know what will happen to some of the main characters. They can't be killed off because they must ultimately win the day and stall the Formics long enough for Earth to launch their own counterattack.

A visceral image of alien war on Earth, I give Earth Afire 4.0 stars out of 5.