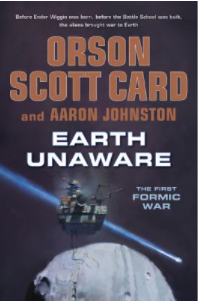 Prequels sometimes get a bad rap because they often feel unnecessary. If the story was important enough to start at the very beginning, then that's where the series should have started. Still, there is a comfort in prequels that comes from knowing what will happen. Little details that the reader knows will become important for the main part of the series act as subtle nods in the early stages of the series' lore. Earth Unaware is the first book in the Ender's Game prequel trilogy and flawlessly introduces the events that lead to the Earth's drastic response.

Orson Scott Card co-wrote Earth Unaware over a decade after publishing the first books in the Ender Saga. In that time, science advanced to the point where a near-future scenario like the one presented in Earth Unaware could be plausible. All the reader ever knew about the first Formic War from the original series was that the Formics invaded our planet without warning. The beautiful twist in this book is how a few miners out in the Kuiper Belt knew this threat was coming but had unexpected challenges that prevented them from warning Earth.

Unfortunately, the most realistic parts of this book had to do with corporate greed and an ignorant public (much like the plot for Don't Look Up (2021)). The action is certainly exciting and the stakes are quite high since Ender's Game already lets us know what will eventually happen. The only thing I'm disappointed in with this book is how little Mazer Rackham was involved. It was like the authors only mentioned him in passing to introduce him, even if he's arguably the most interesting character out of all the lore presented in Ender's Game.

A plausible, action-packed start to the Ender's Game prequel trilogy, I give Earth Unaware 4.0 stars out of 5.