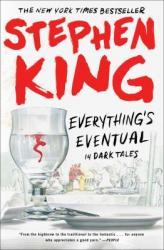 I read this book because I watched the movie “1408” which is based on the short story by Stephen King thats in “Everything’s Eventual” and I wanted to see if the book was as good as the movie. Everything’s Eventual is a book that’s full of short story’s, and while I didn’t like a few, there was also a couple really good ones! I would highly recommend one of the short story’s called “The Road Virus Heads North”. It has actually become one of my favorite Stephen King stories. Also, I personally thought it was one of his creepiest. Overall, if you are a big Stephen King fan like me, I would recommend reading this book.