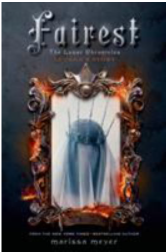 I’m not sure when it happened, but somewhere in the last decade or so, the idea of “redeemable villains” took off. So many stories had antagonists that had their heinous acts justified by some past trauma that somehow made them more human and understandable. While I appreciate flawed characters and the bad decisions that eventually led them down the dark and evil path, I don’t think it’s always necessary to make villains redeemable. That is unless it’s done well. Fairest does it well.

Right from the first pages of Fairest, the reader understands that Levana was the runt of the family. The amount of teasing and hypocrisy that formed this young girl into the evil queen she would eventually become is understandable. However, the real brilliance of this story comes in when Levana tries to solve her problems the only way she knows how: by manipulation. It’s not entirely her fault, as the royal family seemed to be built on this foundation of getting what they want by any means necessary—still, it doesn’t excuse what she did.

Even if Fairest is only a side-story for the Lunar Chronicles series, I think it’s required reading to understand the series’ main antagonist fully. If you want to read it chronologically (before Cinder ), it’s a good amount of backstory that will help bring you up to speed, even at the expense of being spoiled by some of the (albeit obvious) twists of the series. If you read it after Cress and before Winter, then it stands as a much-needed flashback before the conclusion of the series. At the very least, I’m glad that this story wasn’t crammed into the other books and was given the room to be its own story.

The best “understandable villain” I’ve ever read, I give Fairest: Levana’s Story 4.0 stars out of 5.