Book Review: I Am Not Your Perfect Mexican Daughter 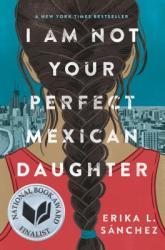 As the daughter of Mexican immigrants, Julia was happy that her older sister Olga fulfilled the role of "perfect Mexican daughter." Prim and proper, Olga always did what she was told and followed the rules. During Julia's junior year in high school, Olga was run over by a semi-truck and killed. After Olga's death, Julia is surprised when she finds some scandalous items in Olga's off-limits room. As Julia tries to learn more about her dead sister, she finds herself learning more about her family, friends, and ultimately, herself.

YA contemporary fiction is not really my thing - I went on a reading spree of this genre recently as I was reviewing my Goodreads "read" list from 2018 and realized that I have read zero books in this genre. Because I need to read it for work, I decided to go with award winning books and/or authors from a different background than myself. This book, a National Book Award finalist about the daughter of Mexican immigrants living in the US, met that metric and appealed to me on the diversity front. I gave it a go, and was quite pleasantly surprised.

Julia is an extremely sympathetic character, and not just because she does fairly well in the face of a lot of adversity. Her voice is at times raw and honest and at other times snarky and hilarious, which really worked for me. Even though we don't have a lot in common, I was able to connect with Julia and I really cared about her and her story.

There's a lot of character development as Julia slowly learns more about her family members and their pasts, and there's just enough intrigue to keep the pages turning.

In addition to being a good coming of age story, this book covers some really important topics. Obviously, there's a lot about grief and how we grieve differently. Julia is suffering from depression, and the book is not shy about discussing her mental illness. The end of the book is followed by a section entitled "Mental Health Resources." Moreover, I learned a bit about some aspects of Mexican culture, and I got to take a peak into the lives of folks who had recently immigrated into the US from Mexico.

Considering this wasn't really my thing in the first place, I quite enjoyed it! Readers of contemporary YA will like this one - its got a touch of romance, a likable protagonist, and loads of substance. 3.5 stars.