Book Review: I Am Number Four 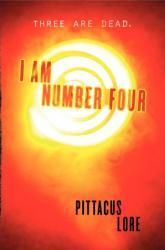 I Am Number Four by Pittacus Lore is an entrancing sci-fi/fantasy adventure that is definitely worth the read. The story follows a boy called “Four”. Four, and his guardian Henri, are aliens from another planet. Four is one of nine children with magic powers who escaped their home planet when another alien race (called the Mogadorians) invaded. Now, it is only a matter of time before the Mogadorians, who intend to take over Earth, catch up with Four and Henri.
I love this book. I have read it upwards of ten times, but it still remains entertaining every time. Even though Four is an alien, he has completely human feelings and that makes him a really likable and realistic character. There is never a dull moment in the story, and although I have already read the second book, I want to know what happens next. I recommend this book to all sci-fi enthusiasts, and even those who don’t love it. You absolutely cannot go wrong with reading this book.