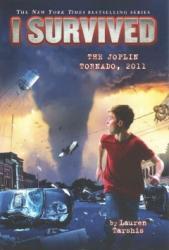 Dexter has always wanted to go storm chasing. So when Dr. Gage, a meteorologist comes to Joplin, Dex has a chance to do just that. The storm seems harmless enough, at first. But when they realize the clouds are hiding a tornado, the storm chases them instead. Dex is trapped in the car. Can he survive, just like his brother Jeremy, a Navy SEAL?

This book is ok. It had lots of detail, and I especially liked the tour of the meteorology van, because I enjoy science. I also liked the way Mrs. Tarshis described all of Dex's feelings about his brother and the tornado. It seemed like Dexter was real, at some points in the book. It also got to the action pretty quick, and it is interesting the whole way through. I would read this book if you are bored, like most of the books in the I Survived series. It could have been longer, though.