Book Review: If I Was Your Girl 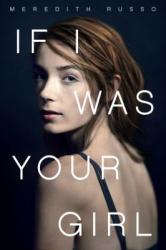 Earlier this year, I read If I Was Your Girl, and it is one of the most timely books I have ever encountered. Meredith Russo’s tale of a young girl moving to a new town is so much more than your standard teen romance.

Amanda just moved to Lambertville, a small Tennessee town where the big events are high school football games and church socials. She’s nervous about getting a fresh start for her senior year of high school, but she quickly makes a handful of friends. However, she’s hiding two big secrets. One, she attempted suicide while she was at her old school. Two, Amanda is transgender. Amanda is not expecting to fall in love, but encountering Grant, a young man with secrets of his own, leaves them both struggling to be honest with each other.

Amanda’s parents are separated, and she moves from a larger city where she lived with her mother to a small town where her father is still coming to terms with his daughter’s identity. If I Was Your Girl tells Amanda’s story almost flawlessly, interweaving flashbacks to her old life and helping the reader understand Amanda’s reasons for transitioning and her acceptance in her new home. Meredith Russo blends some of her own life experiences into Amanda. As readers, we’re shown an incredibly deep look. We see the psychological effects, glimpses into the recovery from the surgical procedures, and her experiences with a local support group prior to the move.

As has been mentioned in many reviews of this book, If I Was Your Girl covers a fairly easy take on transition. Amanda knows from a young age who she is, and has no trouble covering the costs of hormone therapy and various surgeries while she is still young. It’s an idealized version of transition, and it is important to note that this is currently quite rare in reality (I personally was waiting for tragedy to strike throughout my read, because everything seemed to be going too well). This is also noted by the author. “I’m worried that you might take Amanda’s story as gospel, especially since it comes from a trans woman. This prospect terrifies me, actually! I am a storyteller, not an educator. I have taken liberties with what I know reality to be.” However, this does not diminish the importance of a book by a transgender author, starring a transgender character, and featuring a transgender model on the cover in a year when transphobia is at a terrifying high.

All in all, I loved this book. I can’t recommend it highly enough. Is it perfect? No. But it’s a much-needed beacon of hope in what has been a very dark year for LGBT+ folks around the country.