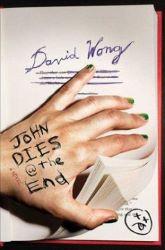 John Dies at the End is a story on two levels. On hand hand, it's a poignant exploration of the darkness of humanity, the fear of the unknown, the tragedies of life, and the devastating realities we exist besides everyday. But also, it's about two idiots on a space drug and their strangely resilient dog.
This book should be the blueprint for every dark comedy. It isn't a needlessly tragic story with a few laughs thrown in or a joke fest that undercuts every poignant moment. It blends comedy and tragedy seamlessly, balances it perfectly, and hits it for a home run with meticulous writing and characters. This is mostly done by finding the hilarity in tragedy, specifically the tragedy of life. This book is strangely and wonderfully existential for being mostly about shadows and movie monsters, a very classic demons of a character mirrored by demons of the world. The characters in general are stellar, with so many flaws and so much cynicism but with some shining nuggets of morality and love that makes them very easy to root for.
The entire thing is a joke that takes itself seriously in the best way possible. There are horrible moments of death and gore and dehumanization, and I would definitely look up some content warnings, but it's still such a fun ride. One minute there's gruesome character deaths and existential dread and body horror and such, the next minute one of the characters need to just kill the alien larvae quickly to get to work on time. Or their dog explodes and shows up like two days later and they don't care enough to investigate that. It's a rollercoaster of mood swings, but in a good way.
All in all, I don't know how to describe this book without using far too many words. Basically, despite some anticlimactic moments and weaker plot structure, this is a perfect dark comedy. I'd recommend this to any fans of horror, humor, existential dread, nihilistic humor, and well-written alien drugs!