Book Review: This Light Between Us 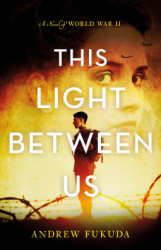 This Light Between Us by Andrew Fukuda is an extremely powerful and compelling historical fiction novel. I came upon this book completely by chance when I had nothing else to read, and decided to give it a chance and I am so glad I did! This Light Between Us, set before and during World War II, tells the story of two pen pals--a French-Jewish girl named Charlie and a Japanese-American boy named Alex. When they are ten years old, Alex's class gets assigned pen pals from France, and the teacher mistakes Charlie as a boy, therefore assigning her to be Alex's pen pal. Alex, who is a cartoonist and lives in his older brother Frank's shadow in their small town of Bainbridge Island, Washington, is shy and quiet and doesn't have a lot of friends. Popular, vivacious Charlie is instantly taken with the idea of writing to an American, and therefore wishes to continue their correspondence. For years, Alex and Charlie's letters fly across the Atlantic, including Alex's cartoons, and Charlie's tales of life in France. They discuss dreams, plans, ambitions, and how they finally will meet. The first part of this book is dedicated to the letters between Charlie and Alex, and as the situation in Europe worsens for Jewish people like Charlie, she finds solace in writing to Alex until the fateful day that Peal Harbor is bombed and all the Japanese Americans on Banbridge Island are directed to be sent to internment camps. Alex and his family are sent to the Manzanar Internment Camp in California right as Charlie's letters to Alex trickle to a stop. Determined to find the girl that Alex has come to love, Alex signs up to go to war.

I've read Farewell To Manzanar twice in school, and I found This Light Between Us tells the story of the Japanese internment camps in a much more accessible and heartbreaking way. This book is not a memoir, unlike Farewell To Manzanar, and even though the experiences described in both are the same, I connected to Alex's family's struggles in this book much more than I did in Farewell To Manzanar. The utter desperation of the entire family and the lack of hope described in this book is so heartbreaking that it is understandable why Alex signs up to go to war. I was also worried that the part of the book dedicated to Alex fighting in the war would be slow or even boring. Alex is constantly motivated by his desire to find Charlie. Every struggle in training, every battle he fights is for the purpose of finding her. The characters Alex experiences in his regiment are memorable and touching, and add to the narrative beautifully.

There is a quote from Jane Eyre that talks about a string being knotted in on person, right below their heart, and tied to another person, and however many miles away they may be, that string always will bring them back together. This concept is expressed and used many times in This Light Between Us, and truly represents the love that Alex and Charlie have for each other-- the idea of loving someone you've never met but who knows you better than anyone else is such a clever take on a historical fiction love story, and really sets This Light Between Us out from the crowd of WWII novels.

I loved this book. I read it in just a few days, and found it impossible to put down. I would recommend this book to anyone who likes historical fiction, romance, or just a good story! This Light Between Us is a powerful gem of a book that I highly recommend!