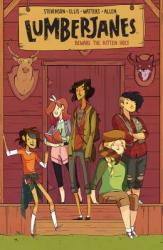 Do you like magical creatures? Do you like actually well-executed pop-culture references? Do you like respectfully handled minority representation? Then the Lumberjanes series is definitely for you! It follows the adventures of five girls at a very unusual summer camp - Ripley, Jo, Mal, Molly, and April. Together, they encounter all manner of magical beasts, artifacts and locations, all while bonding with each other & following their motto of 'Friendship to the MAX!'

The series also has representation to offer, as I previously mentioned. With not only a main-cast lesbian couple, but a trans character,a nonbinary character, and several characters of color, it does well showing the diversity that exists in our world. "But, the art! What do you have to say about the art?" I hear you ask. Well, being a comic, it does have to convey much of its story through images. Through volumes, the art style does shift as different artists draw for Lumberjanes, but it consistently holds in a quality range of 'good' to 'great'. The main artist's style is a little unusual & a bit difficult to get used to, but it'll quickly grow on most readers. Overall, the Lumberjanes series is worth a read, even if it doesn't quite sound like your thing. It's charming and sure to delight pre-teen and teen readers.