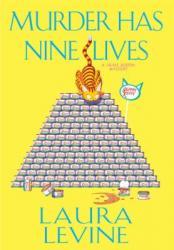 Jaine Austen has a trip to Hawaii with her parents on the horizon, and her new freelance writing assignment gets her a date with the company president's handsome nephew. Just when Jaine thinks her life couldn't get any better, her cat Prozac lands a starring role in a new cat food commercial. Visions of fortune and fame flitter in Jaine's eyes, but it becomes clear that the person who hired Prozac is in some shady dealings, and that the inventor of the cat food is an absolute a**hole (excuse my French). Just as the shoot is about to end, the inventor of the cat food drops dead on set, and it's clear that it wasn't accidental. With everything she was looking forward to now at stake, Jaine Austen must put on her detective gear to catch the culprit before they take a swipe at another victim.

This novel is Laura Levine at her best. At every point when I was reading this novel, I was unable to guess what would come next, and every step of the story had me full of anticipation and joy. It was pretty satisfying to watch Lance get his just desserts, as well as seeing the side plot with Jaine's parents not revolve around one embarrassing antic of Mr. Austen, but a human event that slides into chaos. The mystery, as I said, was handled incredibly well, keeping the readers guessing until the very last page, while still having a hearty helping of Laura Levine's hilarious humor. And let me tell you, while the climax was identical to all Jaine Austen mysteries I've read, I did not expect who the culprit was in the end. It was a plot twist I did not see coming! This is definitely a book I recommend you pick up as soon as you can lay your hands on it.