Book Review: Nectar in a Sieve 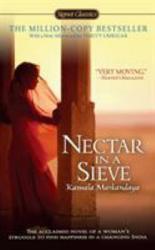 This novel follows the life of a young Indian girl named Rukmani, who is married off at the age of twelve. She marries a poor farmer, Nathan: because she has three older sisters and is not as "desirable" by Indian standards, her parents cannot find a better suiter besides a poor farmer. Throughout their marriage, Rukmani and Nathan struggle with poverty, and misfortune. In addition, British colonizers have set up posts in their town, further destroying Rukmani and her family's sense of community and opportunity.

My favorite character is Rukmani because of her complexity. She is a flawed and interesting character because, on one hand, she breaks the gender norms of her culture and often finds ways to support the family even when Nathan can. However, I will argue that Rukmani is complacent in her poverty and accepts things as the way they are knowing she could do better. I also really liked how this book touched on intergenerational conflicts. Rukmani often finds herself detached from her children because they're growing up in westernized society. Nathan is my least favorite character because he's just...there. Overall, this was a good book because it exposed me to a different culture.