Book Review: No Longer at Ease 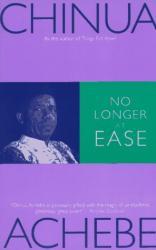 No Longer at Ease is the second installment in the African trilogy series. It is preceded by Things Fall Apart and follows the life of Obi, Okonkwo's grandson. Obi leaves his village in Nigeria to pursue an education in Britain where he meets Clara and falls in love with her. He returns to Nigeria and gets a job in civil service with the help of the board of elders. Obi is conflicted between his African culture and Western lifestyle, and heavy in debt, he takes a bribe.

Just like his grandfather, Obi is strong-minded and stubborn. He intends on marrying Clara although she is an osu, and begins taking bribes when he cannot pay his debts. He questions Nigerian traditions, and often compares Africa to Britain, ultimately positioning him in a place where he finds it nearly impossible to balance both cultures. However stubborn and sometimes reckless Obi is, he's a symbol of generational growth: unlike his grandfather and father, Obi ultimately understood that one culture was not better than the other, and change was imminent. Okonkwo, Nwoye, and Obi symbolize the different industrial stages of Nigeria and the social turmoil that followed, and they show the theme of western versus eastern culture clashes.